Home powershell scripting How to work with Variables, arrays, hash tables, and script blocks in Powershell

How to work with Variables, arrays, hash tables, and script blocks in Powershell 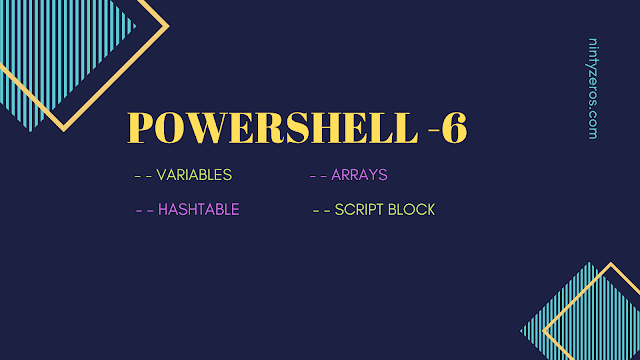 Variables are a big part of any programming language or operating system shell, and PowerShell is no exception. In this post, we’ll explain what they are and how to use them, and we’ll cover some advanced variable-like data structures such as arrays, hash tables, and script blocks.

Variables are important for the creation of good scripts.


A variable is like a placeholder and every kind of object and type can be stored in that variable.


Variables are the heart of every good script, cmdlet, function, and module.

In PowerShell, a variable name generally contains a mixture of letters, numbers, and the underscore character. You typically see variable names preceded by a dollar sign:


Being strict with variables


PowerShell has another behavior that can make for difficult troubleshooting. For this example, you’re going to create a very small script and name it test.ps1. The following listing shows the script.

This kind of behavior, which doesn’t create an error when you try to access an uninitialized variable, can take hours to debug.

In many programming languages, there’s a definite difference between an array of values and a collection of objects.
In PowerShell, not so much. There’s technically a kind of difference, but PowerShell does a lot of voodoo that makes the differences hard to see.
Simply put, an array is a variable that contains more than one value. In PowerShell, all values—like integers or strings—are technically objects. So it’s more precise to say that an array can contain multiple objects.
Arrays can be created from simple values by using the array operator (the @ symbol) and a comma-separated list:


Below examples will help you understand much better.

Hash tables (which you’ll also see called hash tables, associative arrays, or dictionaries) are a special kind of array.
These must be created using the @ operator, although they’re created within curly brackets rather than parentheses—and those brackets are also mandatory.
Within the brackets, you create one or more key-value pairs, separated by semicolons. The keys and values can be anything you like:


Ordered hash tables
One problem with hash tables is that the order of the elements isn’t preserved. Consider a simple hash table:


With PowerShell v3 and v4, you can create a hash table and preserve the order of the elements:

This we have just forced into this post 👏, but like variables, arrays, and hash tables, script blocks are a fundamental element in PowerShell scripting. They’re key to several common commands, too, and you’ve been using them already.

In addition, it can be saved to variables, and even passed to functions or other language constructs:

{ 'This is a simple ScriptBlock'}


Conclusion:
Variables are one of the core elements of PowerShell that you’ll find yourself using all of the time.
They’re easy to work with, although some of the specific details and behaviors that we covered in this post represent some of the biggest “gotchas” that newcomers stumble into when they first start using the shell.
Hopefully, by knowing a bit more about them, you’ll avoid those pitfalls and be able to make better use of variables.