Variables and Types in Python - A Comprehensive Beginners Guide

python
python 3
python programming
python tutorial
In the previous post, we got started with the python lesson which gave some basic idea about the syntax. We got started by writing a simple "Hello World program".In this lesson, we are going to get started with understanding variables in python. This lesson is again a beginner course to help you understand the basic concept. This post will cover different types of variables with syntax and deep dive into various type os variables like global & local variables. 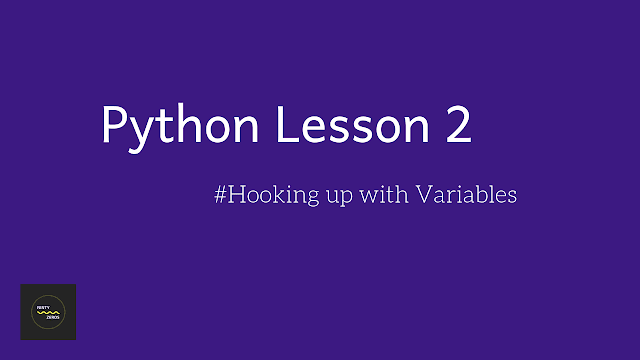 Prerequisite for this course

What are actually variables?

In computer science, a variable is a value in a program that can change. It does not have to be a number — it can be a string (text value), a date, an amount of money, an object such as a picture, or simply null (which means it has no content). The value that is stored in a variable can change what happens when the program is run. Because of this, variables are commonly used to store input and output values.

What are the variables in python?

Variables are nothing but reserved memory locations to store values. This means that when you create a variable you reserve some space in memory.

Python variables do not need explicit declaration to reserve memory space. The declaration happens automatically when you assign a value to a variable. The equal sign (=) is used to assign values to variables.

Can we do multiple assigment ?
Yes, that's the expected behavior. a, b and c are all set as labels for the same name. If you want three different value, you need to assign them individually.
In python, everything is an object, also "simple" variables types (int, float, etc..).
When you changes a variable value, you actually changes it's pointer, and if you compares between two variables it's compares their pointers. (To be clear, pointer is the address in physical computer memory where a variable is stored).
As a result, when you changes an inner variable value, you changes it's value in the memory and it's affects all the variables that point to this address.
For your example, when you do:
a = b = 5 This means that a and b points to the same address in memory that contains the value 5, but when you do:
a = 6 It's not affect b because a is now points to another memory location that contains 6 and b still points to the memory address that contains 5.
But, when you do:
a = b = [1,2,3] a and b, again, points to the same location but the difference is that if you change the one of the list values:
a[0] = 2 It's changes the value of the memory that a is points on, but a is still points to the same address as b, and as a result, b changes as well.

Local vs Global Variables in python

Consider the below example:

If a variable with same name is defined inside the scope of function as well then it will print the value given inside the function only and not the global value.

To make the above program work, we need to use “global” keyword. We only need to use global keyword in a function if we want to do assignments / change them. global is not needed for printing and accessing. Why? Python “assumes” that we want a local variable due to the assignment to s inside of f(), so the first print statement throws this error message("undefined: Error: local variable 'x' referenced before assignment"). Any variable which is changed or created inside of a function is local, if it hasn’t been declared as a global variable. To tell Python, that we want to use the global variable, we have to use the keyword “global”, as can be seen in the following example:

We have created a reference to global variable what if i want to delete and re-create a new.

How to delete every reference of an object in Python?
You can also delete the reference to a number object by using the del statement.


An object will be deleted as soon as all references to that object get removed. Python keeps a reference count internally - to illustrate :


The Python garbage collector will delete the object eventually. There is no guarantee in the CPython standard that the object will be deleted immediately, or at any time before the program ends - it depends how often the GC runs - how quickly your program runs, and whether there are circular references - (if two objects refer to each other, even if neither of the objects can be accessed through any names, the ref count of each object will never reach 0). Don’t rely on the ``__del__`` method to be triggered - it might be, but then again it might not.

This guide is an overview of Python Data Types.

Most of the time Python will do variable conversion automatically. You can also use Python conversion functions (int(), long(), float(), complex()) to convert data from one type to another. In addition, the type function returns information about how your data is stored within a variable.

List(list)
Lists are a very useful variable type in Python. A list can contain a series of values. List variables are declared by using brackets [ ] following the variable name.

Lists aren’t limited to a single dimension. Although most people can’t comprehend more than three or four dimensions. You can declare multiple dimensions by separating an with commas. In the following example, the MyTable variable is a two-dimensional array :

Tuples are a group of values like a list and are manipulated in similar ways. But, tuples are fixed in size once they are assigned. In Python the fixed size is considered immutable as compared to a list that is dynamic and mutable. Tuples are defined by parenthesis ().

Here are some advantages of tuples over lists:

Dictionaries in Python are lists of Key:Value pairs. This is a very powerful datatype to hold a lot of related information that can be associated through keys. The main operation of a dictionary is to extract a value based on the key name. Unlike lists, where index numbers are used, dictionaries allow the use of a key to access its members. Dictionaries can also be used to sort, iterate and compare data.
Dictionaries are created by using braces ({}) with pairs separated by a comma (,) and the key values associated with a colon(:). In Dictionaries the Key must be unique. Here is a quick example on how dictionaries might be used:

Dictionaries can be more complex to understand, but they are great to store
data that is easy to access.

That’s pretty much it for this tutorial. I hope you enjoyed it!
I hope you can help me with more examples. I would also like to know if you
can share some example with usage in real algorithms with this data structures.
happy Coding !