Loops in Python 3 - A Definitive Guide For Beginners

python
python 3
python programming
python tutorial
In the previous post, we got started with the python lesson which gave some basic idea about the syntax on Conditional Statements mostly If..else. We got started by declaring variables and then we proceeded to check various datatypes with Conditional Statements. In this lesson, we are going to continue with understanding conditional statements with loops(for loop and while loop) in python. This lesson is again a beginner course to help you understand the basic concept. This post will cover different types of Loops in python and its usage in details.

Prerequisite for this course 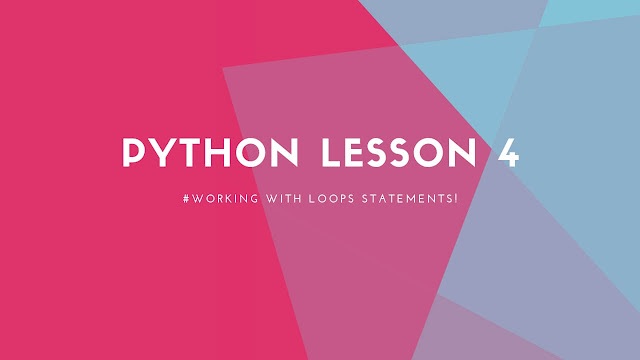 Why do we use Loop?

In order to know why we use looping in programming, we will first, be aware that different programming languages have different for loops. In Python, for instance, you can iterate through all the items in a list by writing loops.

Loops are used in programming as a test to know if the arguments in a clause are true or false and then determine to do an action that may involve skipping the clause and going to the next one. There are many different types of looping. If your loop only needs a test to decide if it should keep looping or not, then a do-while fits that. If you code a do-while loop and then graft on extra statements to initialize the loop counter and to increment the loop counter, then your program would likely be clearer if you'd just written a C-style loop in the first place.

In Python, you can use the “for” loop in the following manner.

The “iter” represents the iterating variable. It gets assigned with the successive values from the input sequence.


The “sequence” may refer to any of the following Python objects such as a list, a tuple or a string.
Let's take a look into a simple example to understand the syntax.
Here’s what’s happening in this example:

Do we have better way if we dont want to loop the whole list?

it generates a list of numbers, which is generally used to iterate over with for loops. There's many use cases. Often you will want to use this when you want to perform an action X number of times, where you may or may not care about the index. Other times you may want to iterate over a list (or another iterable object), while being able to have the index available.


range(stop)
When you call range() with one argument, you will get a series of numbers that starts at 0 and includes every whole number up to, but not including, the number you have provided as the stop.

When you call range() with three arguments, you can choose not only where the series of numbers will start and stop but also how big the difference will be between one number and the next. If you don’t provide a step, then range() will automatically behave as if the step is 1.


Can the steps in range() in python be negative or Zero ?

Yes , I Will give this as exercise for practice ,but we can have negative as steps which will be used in decrement while iterating.
But for 0 its not possible It will not allow to run the loops.You will face with "ValueError: range() arg 3 must not be zero".

You can try both the example as practice.

Example 1: Checking if the range of number is divisible by 3.

## Checking if num is divisible by 3


The next topic which we are going to see is in loops , The While loop.


Lets take a example to understand the Syntax:

Here’s what’s happening in this example:

In each example you have seen so far, the entire body of the while loop is executed on each iteration. Python provides two keywords that terminate a loop iteration prematurely:

continue immediately terminates the current loop iteration. Execution jumps to the top of the loop, and the controlling expression is re-evaluated to determine whether the loop will execute again or terminate.

We will straight jump into example to understand it better but using For loop.

The else with While:

Python allows an optional else clause at the end of a while loop. This is a unique feature of Python, not found in most other programming languages. The syntax is shown below:


In the above example:

Check if the number is prime or not.


A positive integer greater than 1 which has no other factors except 1 and the number itself is called a prime number. 2, 3, 5, 7 etc. are prime numbers as they do not have any other factors. But 6 is not prime (it is composite) since, 2 x 3 = 6.

In this program, variable num is checked if it's prime or not. Numbers less than or equal to 1 are not prime numbers. Hence, we only proceed if the num is greater than 1.

We check if num is exactly divisible by any number from 2 to num - 1. If we find a factor in that range, the number is not prime. Else the number is prime.

We can decrease the range of numbers where we look for factors.

In the above program, our search range is from 2 to num - 1.
We could have used the range, [2, num / 2] or [2, num ** 0.5]. The later range is based on the fact that a composite number must have a factor less than square root of that number; otherwise the number is prime.

That''s the end of  topic on loops in python .Hope it make sense of writing such a deep and long post.